It’s that’s time of year again. This year I will be opening up for three days over the weekend:

Drop in any time between 11 and 5 on any of those days. For details take a look at the www.openupsheffield.co.uk site.

What’s changed? Well, my work has continued to evolve over the last year, and you’ll see that I am influenced increasingly by my interest in the metalworking of the northern Britain Brigante tribe of 2000 years ago. I’m continuing to explore 3d model making on a small scale using a variety of materials from card to dried Chinese mushrooms. 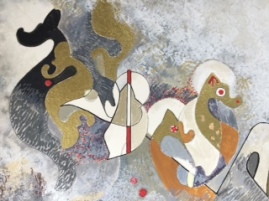 Note, my studio will also be open later in the year from Friday 18th to Monday 21st August.

Digging a big trench for ourselves!

In 2011 my friends Geraldine and Mary were helping to clear a trench at the Time Travellers Dig at Whirlow Hall Farm. A male colleague commented the soil wasn’t moving fast enough, they promptly replied that “Queen Cartimandua wouldn’t have put up with that remark”

A queen in northern Britain? Surely there was only Boudicca and she was based farther south?.

That autumn, Geraldine, Mary, Dorothy and myself set out to research more about this Queen and her Brigante tribe.  We’d been advised that they hardly existed, what a challenge!; even the Romans knew the Brigantes were the largest Iron Age tribe or confederation in northern Britain? We quickly found out just how biased some of the Roman reporting could be. Naturally as the conquerors, and with a sound latin language in place they certainly had a distinct advantage in terms of being believed, although sometimes they were writing 10 years after the event, and from Rome.

Then there is the problem of the money available for archaeology and the magnetic attraction of “Treasure Trove”, with funding being allocated for sites containing spectacular hoards. These have a bigger draw for visitors to museums. Dare I say it, a north south divide?

The history of 2000 years ago can seem a very difficult challenge today, especially as we understand the Romans  to be so organised, technically skilled and so brilliant at networking. Where is the evidence of the native population of Britain? The last 30 years has seen some rethinking. Much more archaeology is being identified.The Portable Antiquities Scheme which records small finds made by the public across Britain, not just “ treasure trove” has opened our eyes to more domestic artefacts. Far more questions are being asked, we have some wonderful technology to detect sites, and of course the internet connects these things together. Even if you have little interest in history these advances  will have affected you.

Our northern Queen Cartimandua, has suddenly come centre stage in the archaeology world.

Her place of residence was most likely at Stanwick, near Scotch Corner. A site of some size and comparable with others in the south of Britain. How do we know? Well a heavy book of archaeological reports, comparing all the digs done on this site has just been published this spring, and this is informing new research.

How did I come to be involved? Well Whirlow is part of my childhood territory. From being a very small child I crossed the fields from Bents Green to visit many relatives in Dore and Totley. I explored the roads to Ringinglow visiting Sheephill farm and Burbage by bike. I was always hoping to unearth something from this ancient landscape especially across Whirlow fields and what we knew as “the Roman Road” at Ringinglow. By a strange “twist of time”,  and many adventures elsewhere, I now live back in Dore, picking up threads from the past and those of my life experiences. My fine art degree has linked with family metalwork and design occupations in Sheffield with which I was involved when working in the city.

So where better to begin a new and fascinating trail from Whirlow across Europe to Italy and back. I could empathise with all those ancient traders, carrying materials and metals to and from the Mediterranean.

In 2012 I found a small enamelled Dragonesque brooch, made in the late Iron Age in Brigantia, it was tucked into a modest display in the Doncaster Museum.The creature had a very lively shape, still retained some colour and seemed carefully made.This was when I started to become really interested, and began my new art work and research.

All images on this site are the copyright of Christine Rodger. If you would like to reproduce my work digitally, please email me.

Photos from the Open Studio 2012